Welcome to the IoT Security Foundation

THE HOME OF IOT SECURITY

Yet along with the many societal, environmental and economic benefits, the rapidly-expanding connected world, represents a growing attack surface for adversaries of all denominations. Everyday vulnerabilities in IoT are being exploited with malicious intent – yet the vast majority of them can be prevented simply and cost-effectively.

Enter the Internet of Things Security Foundation (IoTSF): We aim to make it safe to connect so the many benefits of IoT can be realized.

IoTSF is a collaborative, non-profit, international response to the complex challenges posed by security in the expansive hyper-connected world. As such, IoTSF is the natural destination for IoT security professionals, IoT hardware and software product vendors, network providers, system specifiers, integrators, distributors, retailers, insurers, local authorities, government agencies and others who seek security. Our aim is to raise the quality bar, and drive the pervasiveness of security in IoT. 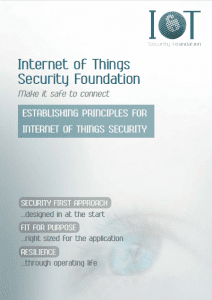 Security is a critical element of IoT deployment, yet it is too often neglected in the development of systems.

This primer guides the reader to important questions that should be considered when designing an IoT device, system or network.

The common theme throughout is that considering security at the design phase can not only save time and effort later, but potential embarrassment and financial loss in the future.