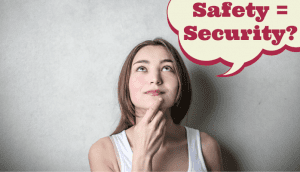 Have you ever wondered what the difference is between safety and security?

I would be surprised if you had unless you work in these areas as we tend to use the words interchangeably. Languages such as German, Norwegian and Spanish have one word to mean both  – or so I am told by my associates who claim those languages as their mother tongue. Ever since the similarity caught my attention a couple of years ago, I have come across many native English speakers who regard the two as equivalent as well.

Yet they’re not quite the same, are they? So what’s the difference?

If you take a moment to think about it, and assuming you have not done so before, it’s likely you’ll struggle to find a solid separation point you’re happy with. I confess I had to enlist the help of the interweb to catalyse my thoughts, and having done so, I thought I’d share them with you as I still frequently encounter the muddling of the two terms.

I’ll start gently; ask yourself a couple of questions that relate to a situation you are likely to be familiar with already:

When you leave your house in the morning, would you think that forgetting to lock your front door or leaving the iron on as presenting identical risk? Or put a different way – do the Police and the Fire Brigade do the same job?

I hope you thought “no” to both. In the case of the Police and leaving the front door unlocked, we’d normally relate those to security and protection – i.e. our possessions being stolen or personal harm inflicted from another person. As for the Fire Brigade and the iron, we’re typically thinking of our safety – in this case from accidental fire. You could also think of each example being a case of “incident” (people related – security) or an “accident” (environment – safety).

Hopefully by now you’ll start to see the difference and resist the urge to argue they’re both the same.

It goes much deeper of course: Security matters tend to deal with malicious intentions – those threats derive from people and their motivations, some form of benefit coming from mischievousness, crime, terrorism, geo-politics or hacktivism. Security threats tend to be planned and can evolve over time meaning we have to react, adapt and defend – sometimes described as an arms-race.  Safety hazards are usually derived from environmental situations where accidents can happen and are less-likely to be caused deliberately. Accidents from lightening strikes or flooding do not tend to be malicious – i.e. they seldom have a planned outcome that directly advantages someone (they are less targeted/discriminating by nature).

If you’re anything like me you’ll probably be looking for examples which break the generality of the argument. I have no doubt you will succeed as I can think of a few right now. However, that is not the point. The point is that safety and security, whilst similar, are not exactly the same thing. They differ in important ways – most significantly source and intent. They are closely related as both present us with risk (danger or harm), yet we protect ourselves in different ways from the security “threats” and those safety “hazards”.

And this distinction matters because?

Almost every industry I can think of is being revolutionised by new technology – our world is changing. A good example from an industry I have been watching these past several years, is automotive. In past years automotive has had intense focus on making driving safer and introduced many of the safety features we take for granted today – air bags, ABS, side bars etc. And we have to give them credit – they have been very successful at making cars safer. Today the traditional OEM’s are pressing their interests in security matters as new technology (especially connectivity) and new entrants interested in disruption and innovation, are driving competition. The automotive industry is heading towards electrification of the drive chain and grappling with the transition to autonomous vehicles. Security issues have caught some of the traditional OEM’s by surprise – last years darling story was the Jeep hack – other scare stories are available. Safety issues – e.g. battery fires – will be on the minds of traditional and new auto suppliers alike.

Automotive is just one example of how our future world is transforming because of technology. Safety and security will feature prominently as we build and connect more and more things using Internet technologies. It is vital that we make these things correctly from the start – and even more, operate to resolve problems once discovered to ensure they are equally safe and secure – critically before we encounter known threat and possible hazard. Product and service companies must assure their customers that safety and security is designed in from the outset so we can trust our new environment.

I am almost done. My aim has been to explain some of the differences between safety and security to help us think of how we manage both types of risk in a technology-transforming world. Both are important.

To conclude, allow me to rewrite the original equation and add a strap line: